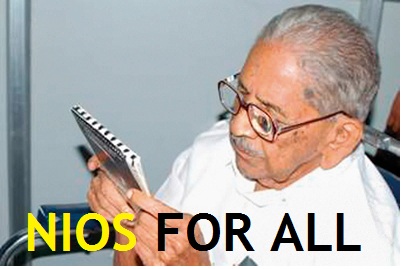 Almost 47 years and two degrees later, the retired income tax officer S. Palani wants to pursue a Masters Phil in Tamil language. But he has one big hurdle to achieve before his decision. He has not completed his class XII examination. The last time S. Palani went to school was in 1967. That was the time when he cleared his SSLC exam. That is where the National Institute of Open Schooling (NIOS) — one of the national boards of education which offers secondary and senior secondary and vocational certificates that students can organize according to their needs and complete at their own will and pace — came to the rescue of Mr. Palani a 64-year-old retired person in 2009 says he google searched for boards which provide education to old people and came to know about the NIOS and immediately applied to it.
Now, Palani spends his evenings underlining important sentences in chapters dealing with various topics from Harappan civilization to methods and techniques of research in sociology.
After his retirement, he pursued a BA in Tamil through the Tamil Nadu Open University, and now, he is waiting for the results for my MA in Tamil. The TNOU offers students the option of pursuing a BA in Tamil even without a class 12 qualification.
It also helps those like Palani, who still want to be “competitive”. It is the story with thousands of people throughout Inida who at some point of their life want to resume their education. So NOS offers them with the best support and guidance to clear their education and feel the  confidence and respect once again.
P. Ravi, regional director of the recently set up NIOS centre in Chennai, said the system was flexible and anyone over 14 years could enrol. The advantage of Open Schooling is that students can choose any combination of the subjects offered, and write the examination at their own pace within five years, after which they can get re-admitted. They can transfer credit for up to four papers,” he said.
Mr Palani said he got into government service after completing a course in typewriting and stenography. The first one from his family to complete SSLC, he hardly seems daunted by the exhaustive sociology, psychology, history, English and Tamil NIOS textbooks on his shelf.
“I am studying to get a PhD. want my grandchildren to respect me.” Said Mr Palani. Eventually, he plans to visit one of the coaching classes. “I might just be the oldest person there,” he said in a humorous style.
For any help related to admission in NIOS please contact SS Coaching @ on our Toll-Free No. 1800-120-6077